Basic knowledge of the Gion festival. 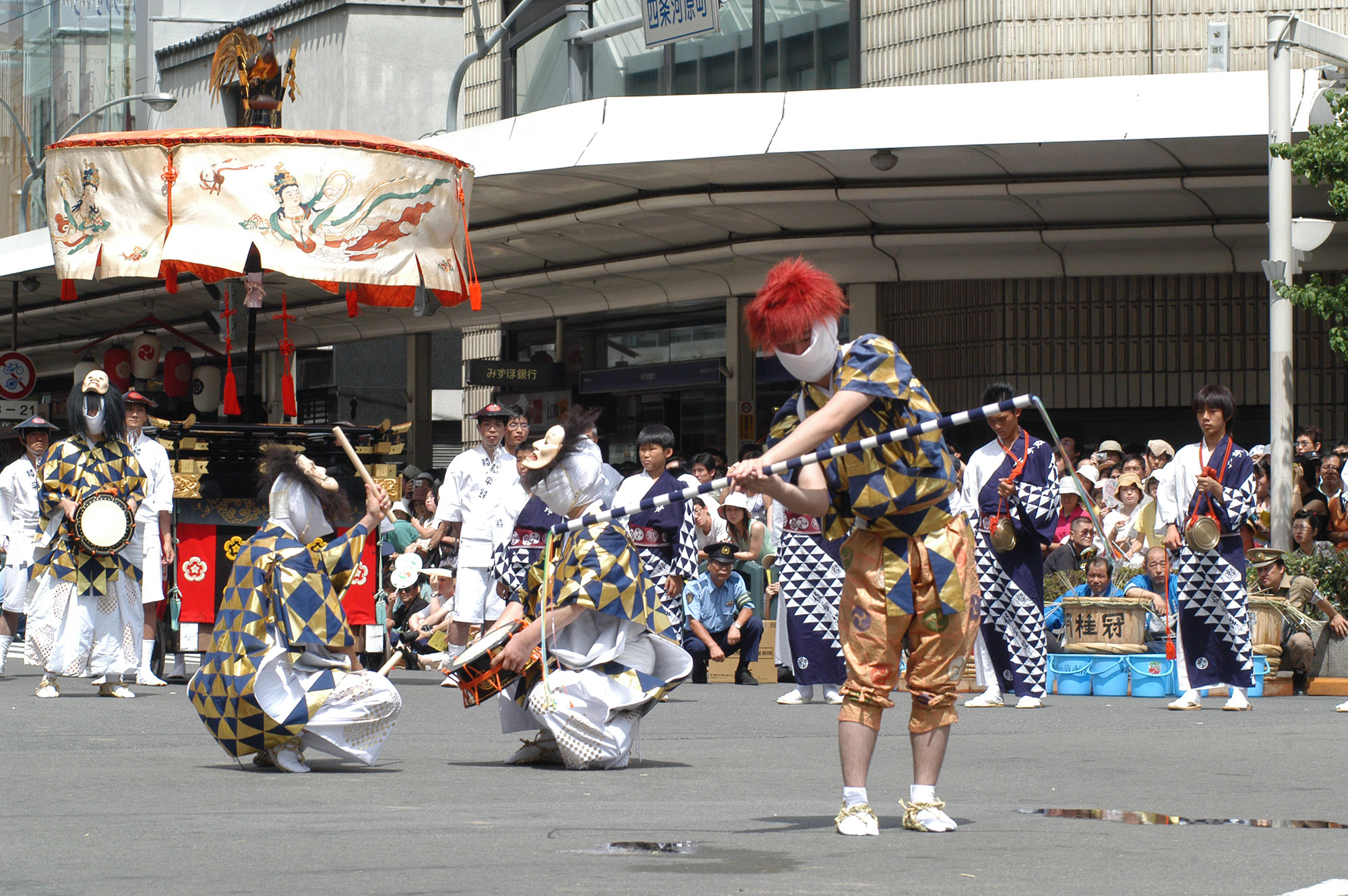 The old name of the Gion festival is ‘Gion Goryōe’. This festival has been deeply influenced by what is called ‘Gion belief’.

Goryō refers to the souls of dead men which still have anger or regret in this world after they have died unexpectedly or from something bad. In former times, many people believed these souls spread infectious diseases in the real world. Then, people decided to hold a festival in which living people lead these malevolent souls to heaven, in order to ward off disaster, by welcoming and solacing these souls. This festival is called `Goryōe’. In old Japanese, ‘e’ meant “gathering”.

The Goryō belief merged with the festival of the Emperor Gozu during the Heian period, and become known as ‘Gion Goryōe’.

TAlthough the Emperor Gozu (Skt. Gośīrṣa) was the god who protected Gion Shyōjya temple in India (Skt. Jetavana), he began to be regarded as a nuisance in Japan, because Japanese people connected him with ‘Goryō belief’.

TPeople believed that if they worshipped this (nuisance) God, they would never catch disease or experience disasters. So, this idea spread among the people. 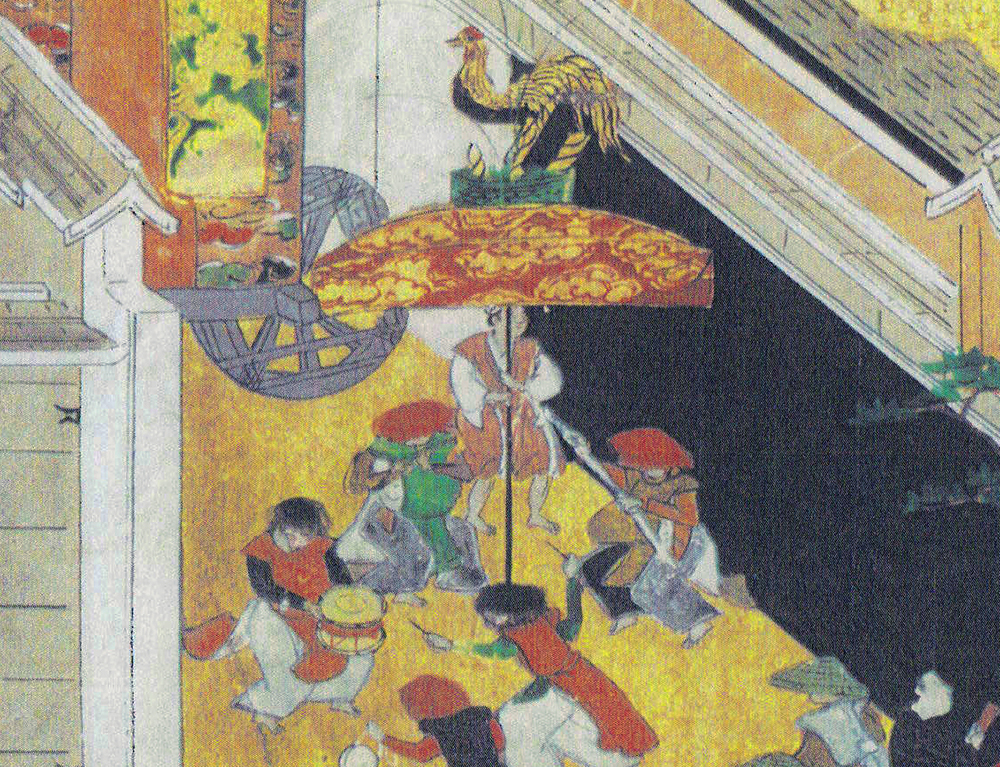 Since it was said that the easiest time to spread disease is between spring and summer, Gion Goryōe is held at this time. This fact also relates to floods which are caused by the heavy rains of the rainy season. Kyoto’s rivers, Kamo and Katsura, used to flood often.

As you know, floods cause not only water disasters but also spread of infectious diseases. So people chose this time to worship `Goryō’ which were thought of as the original cause disaster and disease, and so they prayed for peace for Kyoto.

By the way, there are many ideas about when `Goryōe’ began to be held in Heiankyō (ancient Kyoto) , and the exact date is still unclear. Perhaps, it was during the later Heian period (10th–11th century), in connection with the Gion sya (the main building of a Shinto shrine) which was both sacred to the memory of the Emperor Gozu, and also a shrine mixing Buddhism and Shintoism. On top of that, it’s thought that Gion Goryōe was established as an annual event at almost the same time.

History of the Ayagasa hoko and festival music. 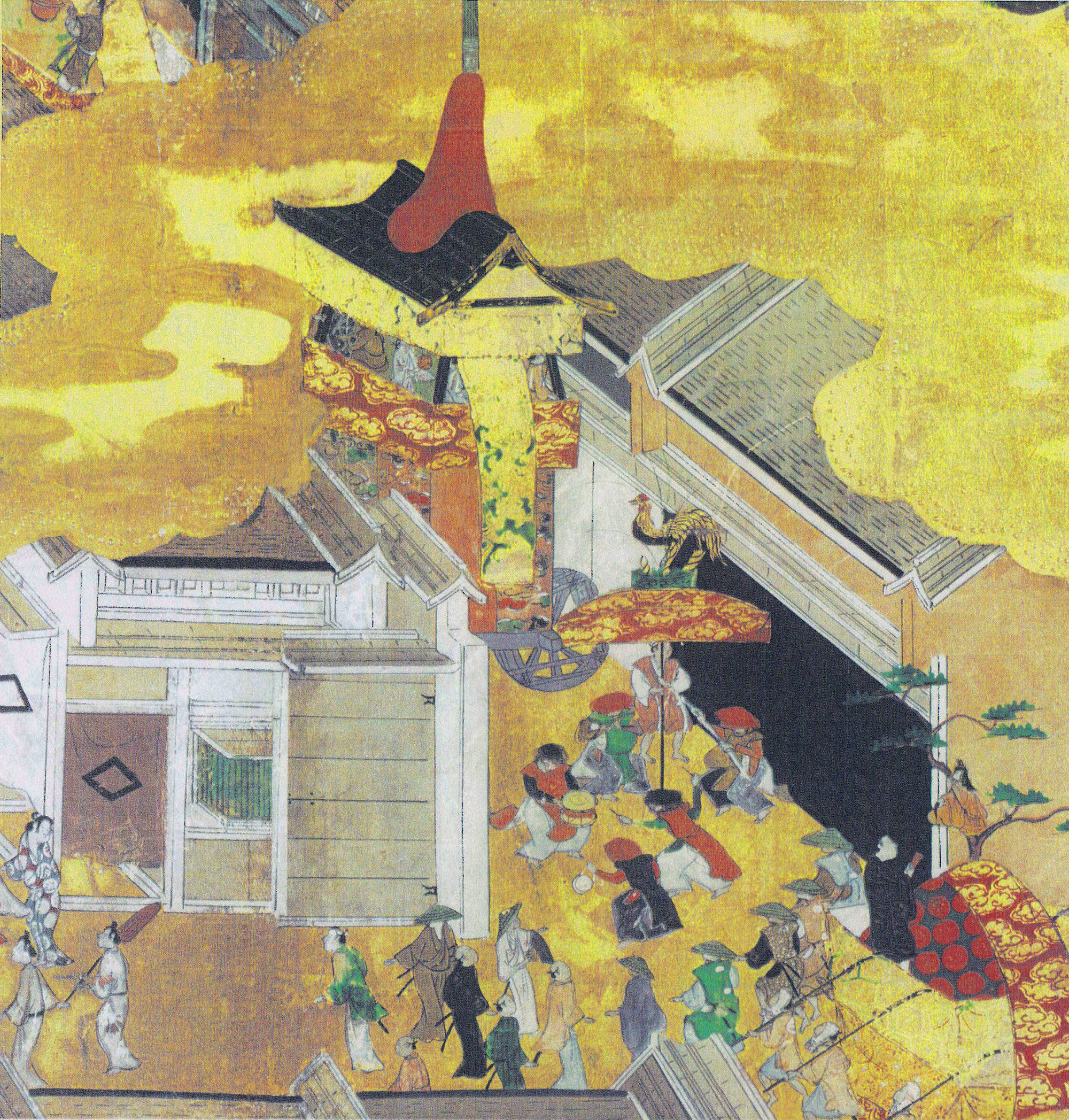 A hoko is a decorative float used in festivals. The Ayagasa hoko has a very rare shape which is called ‘umbrella hoko’ (Kasa hoko). Even now, this shape is rare one among the thirty-two hoko. The Kasa hoko is an old shape, because its shape was formed before the Yama hoko (‘mountain hoko’) of today. Ken hoko (‘knife hoko’) and Kama hoko (‘sickle hoko’) are the same age as the Kasa hoko. It is said that the Kasa hoko reflects the style of Furyū (Furyū is the basic form of decoration for public entertainment). Now, Furyuu is mainly represented by Hana Gasa (‘flower umbrellas’) which are used at a festival at Imamiya shrine which is located in the north of Kyoto city. There is record which says there was an Ayagasa hoko before the Ōnin war, in the first half of 15th century. So we can understand that the Ayagasa hoko is a very old hoko and has existed for more than 550 years.

It is said that at the bottom of the Yama hoko, which appears in the Gion festival, there was a kind of Furyū Hayashimono. Furyū Hayashimono is a dance which aimed at the dispersion of disaster or disease and was also meant to welcome and then send off divine spirits. This characteristic dance is public entertainment performed by dancers playing taiko (a kind of drum) and other percussion instruments. The core of Furyū Hayashimono are hoko, kasa, tsukuriyama, and people in costume. They move accompanied by an orchestra. This is the character of Furyū Hayashimono. Kasa hoko is said to be the old form of Yama hoko, a holy place for a divine spirit where move being accompanied. And then, Yama hoko needed to have a gorgeous orchestra. This fact is also proven by Yama hoko which appear in a record from the Muromachi period. In that record, Ayagasa Hoko and Shijyou Kasa hoko are expressed as Hayashimono which means things with gorgeous orchestras. Strictly speaking, it is meaningless to think of Kasa hoko and ‘bōfuri bayashi’ existing by themselves. Only when both of them are together and move can they have any meaning as `Furyuu hayashimono’. 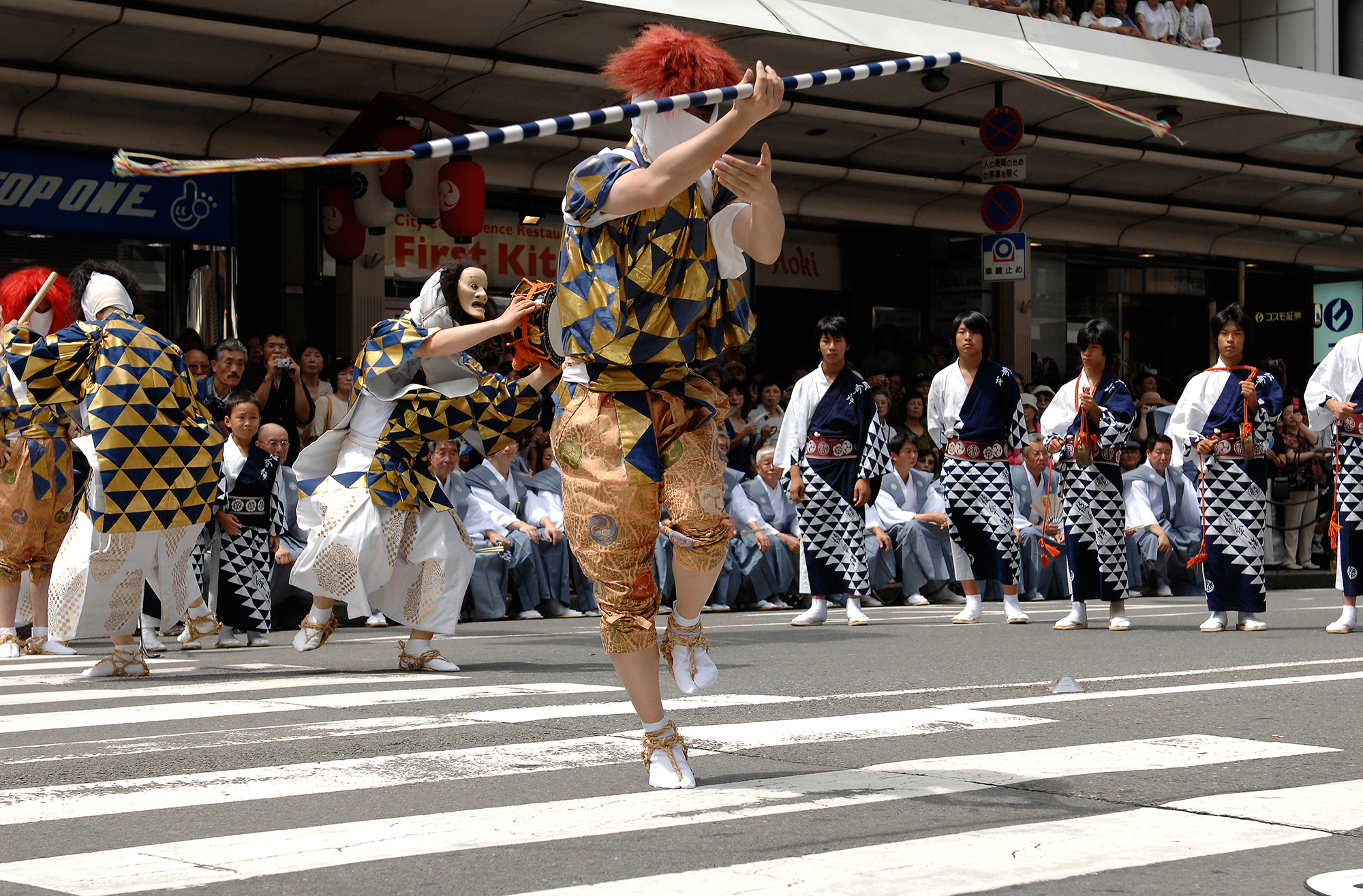 From in the middle of 18th century, also the middle of the Edo period, a form of an ethnic entertainment, the Bōfuri bayashi (‘dance holding a stick’), has been performed in front of the Ayagasa hoko. This ethnic entertainment was dedicated by people who lived in Mibu area. Even today, it is performed by people who belong to the association protecting Rokusai nembutu. Although we know that Bōfuri bayashi was performed before that period from several pictures, it is still unclear what kind of entertainment group had dedicated it before the middle of 18th century. Anyway, Furi bayashi is a unique point of the Kasa hoko because the other Yama hoko don’t have bōfuri bayashi. There is an interesting stick which is used for Bōfuri bayashi. The length of the stick is about 150 centimeters and it has a tassel at each end. The role of the Bōfuri is to disperse misfortune by performing with this stick, together with two Taiko gata (people who play drums). One man holds a drum and another beats it while dancing.